The weather has finally been getting cooler, and I can finally start wearing my Fall clothes! Today, I was finally able to wear my Hetterson sweater for the first time. It is my new favorite sweater, dethroning my Madewell Topnote Cardigan. It's super comfy and made from 100% organic merino wool. It's also extremely well made. I have every intention of wearing this thing to death. 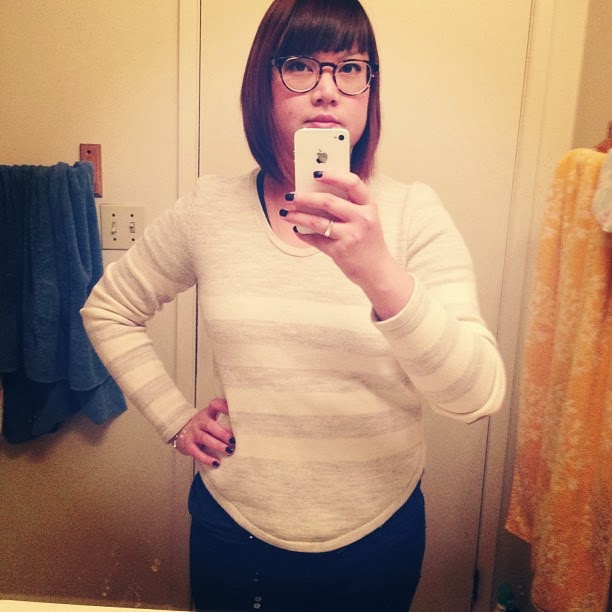 I went to the optometrist today for my annual eye exam. I know some people don't feel the need to see their optometrist often, but I do. Working in a visual field, I want my eyes to be in their best possible health. Last year, I was told that my eyes were a little on the dry side and that I had a scratched cornea. This year, my eyes are perfectly healthy AND my vision has improved. My optometrist looked over my records for the past 8 years and my vision has for the most part stayed the same. My vision has only fluctuated by 0.25 which he told me was really good because most patients keep going up by 1.0 every year. So I'm super happy to hear that my vision and eye health is great! Also, this year is the first year in a long time where I didn't get contacts. I decided to save some money and give my eyes a break from the contacts. So I really had to pick a pair of frames that I absolutely love. These are the ones I decided on. 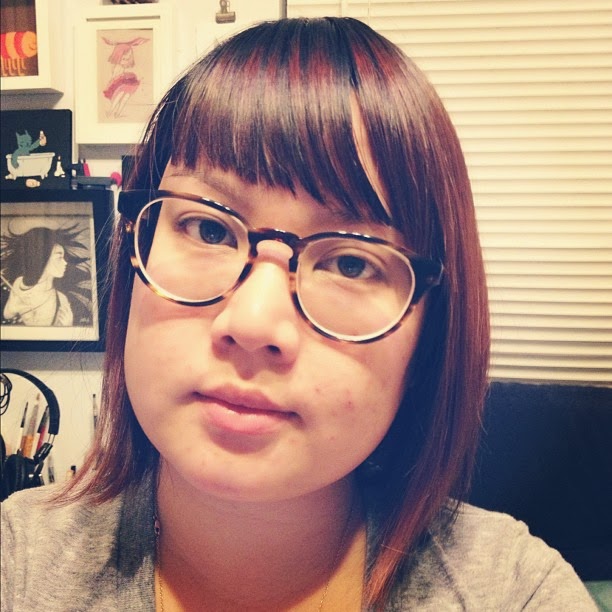 Things have been crazy and I haven't been keeping up with updating the blog. I've been super busy prepping for Renegade Craft SF, as well as fulfilling some Etsy orders, and I'm on the waitlist for Unique LA so I'm just going to double produce as if I got in. If I find out this Friday that I am in fact in, then I'll only have a month to get ready for the show. With things a little stressful around here, I decided to take a break from the grind and did a little shopping for myself. I think of it as buying birthday presents for myself. After dropping off some pins at Flock Shop, Kevin and I headed over to Little Tokyo to do some wandering.

We headed over to Kinokuniya because I wanted to look at their selection of mt washi tape, but I ended up walking out with more than just mt tape. 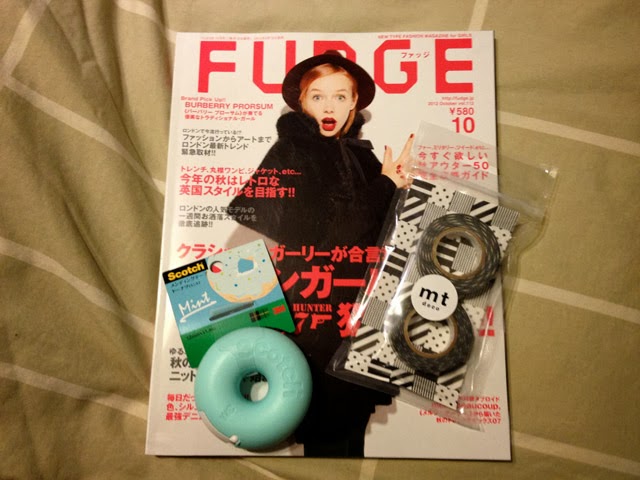 I picked up a new Scotch tape donut dispenser, this time the "mint" one. I recently misplaced my vanilla "whip" one so I wanted another one. I also picked up the October issue of FUDGE, my favorite Japanese fashion magazine. They also had the September and November issues but at $14 each, I had to talk myself out of buying all three of them. I chose the October issue mostly because the featured outfits in it were more my style. And then of course, I also picked up a two pack of mt tape. I had a hard time deciding which pack I wanted but I ultimately decided to keep it simple and go with the black & white.

Then we headed over to Q Pop because Kevin had to pick up a Joey Chou piece he purchased from the Tokusatsu show. The last few times I've been to Q Pop, I avoid looking at the t-shirts because I always end up buying something. But this time, I decided to take a look and found this amazing shirt from Kevin Dart based on his character Yuki 7. I love it because it's kinda Saul Bass-ish mixed with a bit of Jean-Luc Godard. I also love that it says, "A Woman named Danger." 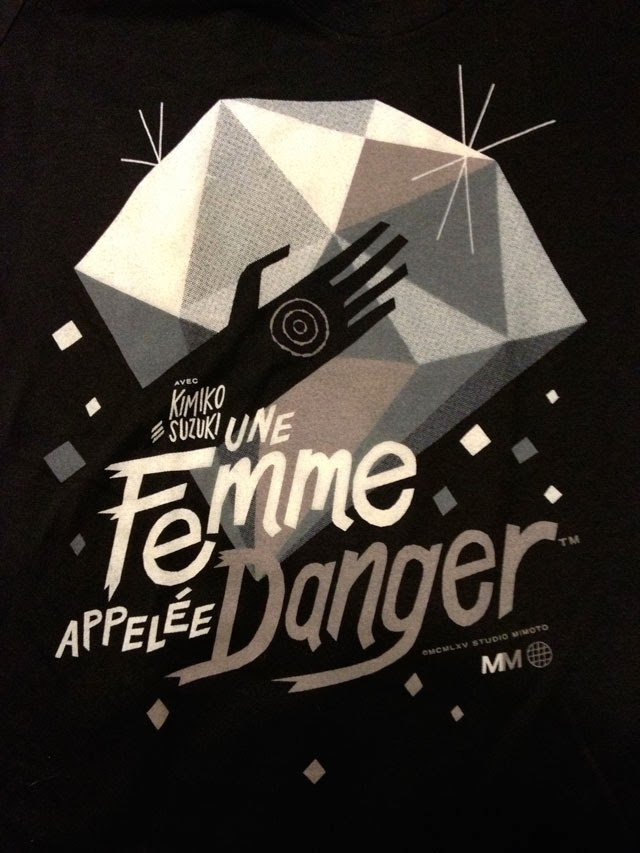 Meet Me in San Francisco!

I am super excited to announce that I will be vending at Renegade Craft San Francisco this holiday season! I will be sharing a booth with Kevin and this is our first time doing a San Francisco show. We're making a bunch of new stuff as well as some old favorites just for the show. So mark your calendars and don't forget to stop by and say Hi! 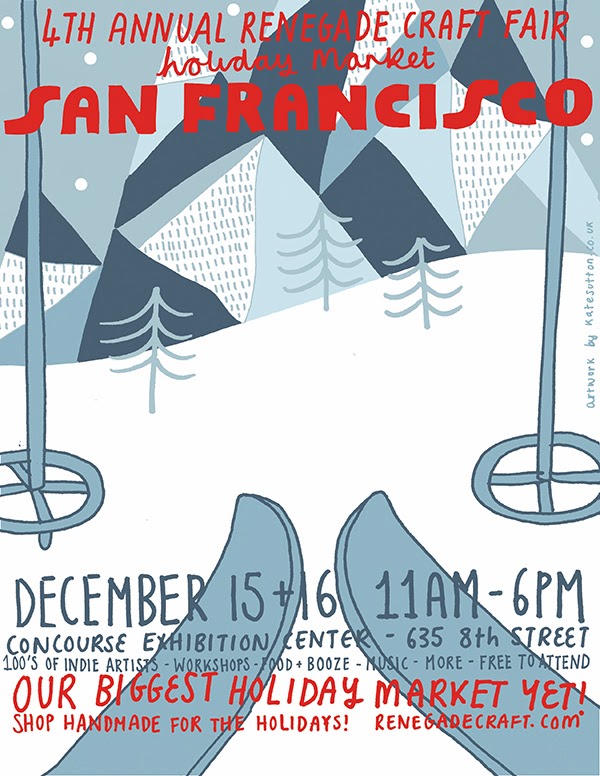 These are Real Jobs

This week, I released a new series of pinback buttons. It's been almost a month since I left my day job. And every day, I try to do more work that I want to do. I don't care how silly or random or weird it is…as long as it's true to who am I. The idea for this series came to me when I was in the shower (of all places). I was thinking about job titles and what do they really mean these days. I also thought about some of the popular pins from my youth like "Slacker", "Princess", "Punk", and how they were meant to be some sort of declaration of character. So I took that idea and some of my favorite activities and I put together a list of humorous and light-hearted jobs. I'm pretty sure there are people out there who actually do these things…they just haven't been given the title yet. There will be more in the future, but here's the initial set.

What I Ate: Hot Red Bus

Yesterday, Kevin took me to Hot Red Bus for the first time for lunch. Hot Red Bus is a new British & Indian eatery that opened up a block away from Gallery Nucleus. I had their samosas and a wrap a couple of weeks ago when Kevin brought them with us to the Hollywood Bowl. But this is my first time actually going to the restaurant. They have just softly opened a couple of weeks ago. It's a very casual kind of eatery; a bit like a fast food joint. All the people who work there are super nice and extremely sociable. I ordered the Doner & Chips. If you've never had doner before, it's a mixture of beef and lamb spun on a vertical rotisserie that is then shaved. It came with a side of curry for the chips (you could also ask for it already poured on). They also gave me a side of their yogurt & mint sauce and their tamarind sauce that went perfectly with the meat. 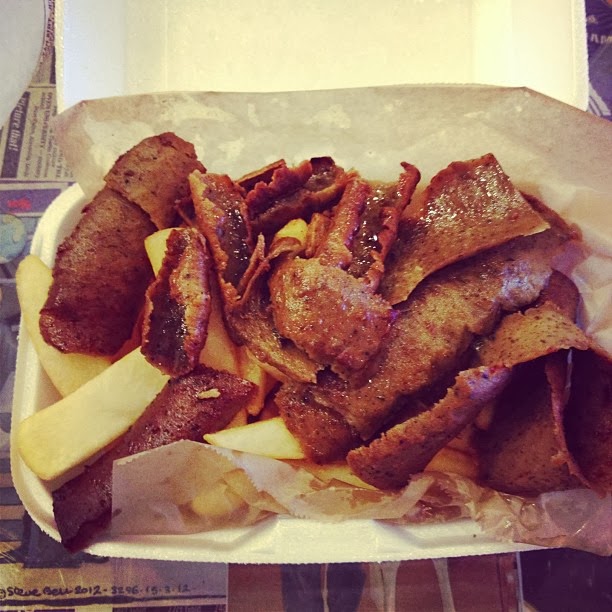 I wish I had taken more pictures of the decor. All the tables are decorated with tabloids and newspaper clippings. The particular table we were at had clippings of Kate Moss and club football (soccer). So if you're ever in the area, I recommend stopping by. I have yet to have something disappointing from their menu.
Tags: alhambra , food , hot red bus , things I ate
0 comments

Keeping with the blue theme set by last week's want, this week I started thinking about this Mary Meyer silk tee and how it had been a while since I last interacted with Whitney (owner of Myrtle) on Twitter or Instagram. We communicate via social media quite often mostly because I never get a chance to stop by the store as much as I would like to…but my wallet thanks me for that! But the last time I was there, I tried on this Mary Meyer top and I instantly knew I was in trouble. It's in the best shade of primary blue. It fits like a dream! and it feels amazing on! If I owned this top, I would wear it to death. But the big killer for me was the price tag…and I also happened to drop a lot of money on that Hetterson sweater. I'm just gonna keep dreaming about it for now. 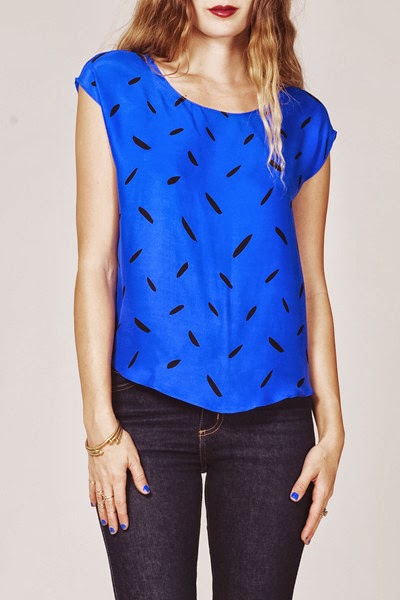 Today, I added these button sets to the shop. They're definitely one of my new favorite things to make. And I just LOVE color!