This past weekend was Renegade Craft LA and it was the first time doing a summer show and it was also the first time I'd ever done an outdoors one too. All I could say is it was a big learning experience. The biggest factor that affects an outdoor show is the weather. And I feel like the weather played a huge role in whether or not people were in a buying mood. For the first half of Saturday, it was miserably hot and for the second half, it looked like it was going to rain. In fact, it was drizzling. The weather on Sunday was much nicer. It was overcast with a breeze and still a little warm, but it felt good. And I noticed that there were more people out & about and willing to buy.

Here's a little peek at my setup: 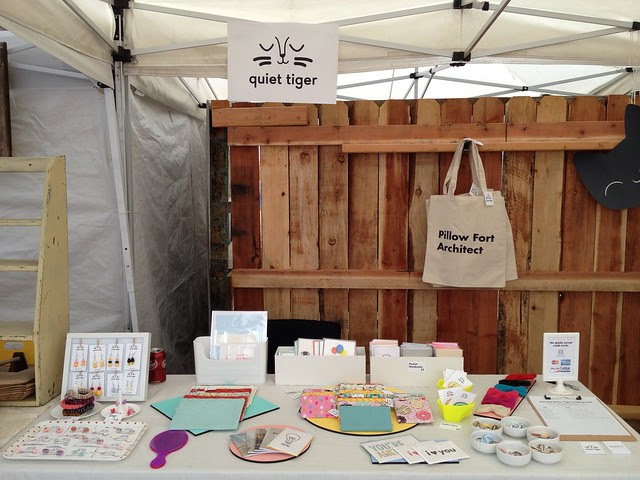 And here's Kevin's side of the booth: 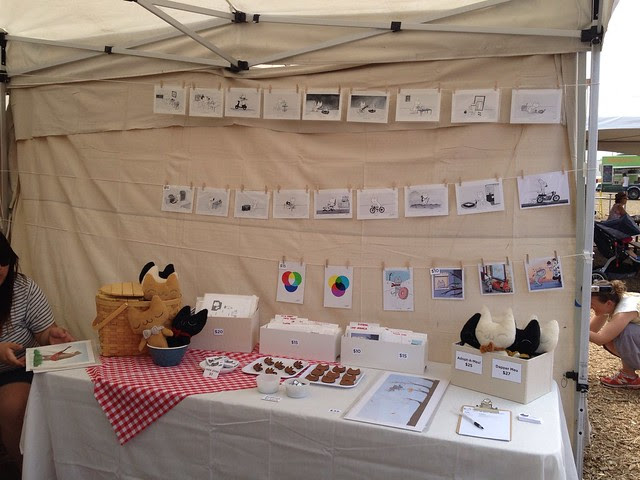 Overall, this was the slowest show I had ever done and I probably won't do it again. I might consider doing the LA holiday show just because holiday tends to be busier, but it being outdoors is a bit of a turn-off for me. There was just so much dust in this area that at the end of each day, there was a gross layer of dust on all the products.

So now I'm getting ready for San Francisco which is my favorite show to do. I made a few more pouches, but I didn't really have to make that much more inventory since I still had a lot of leftovers from the LA show. 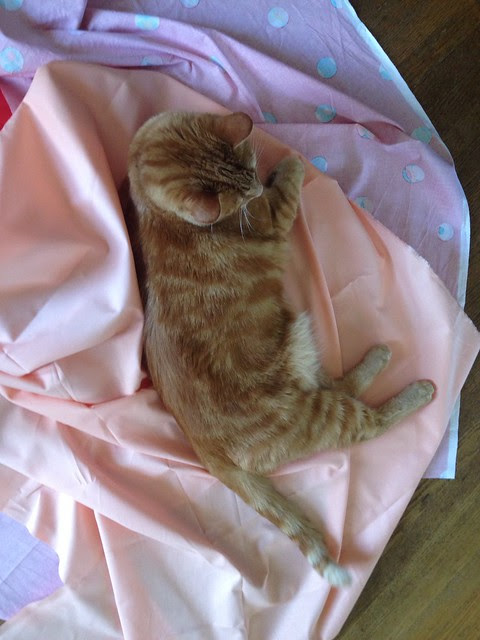 And of course, Sebastian wasn't very much help. 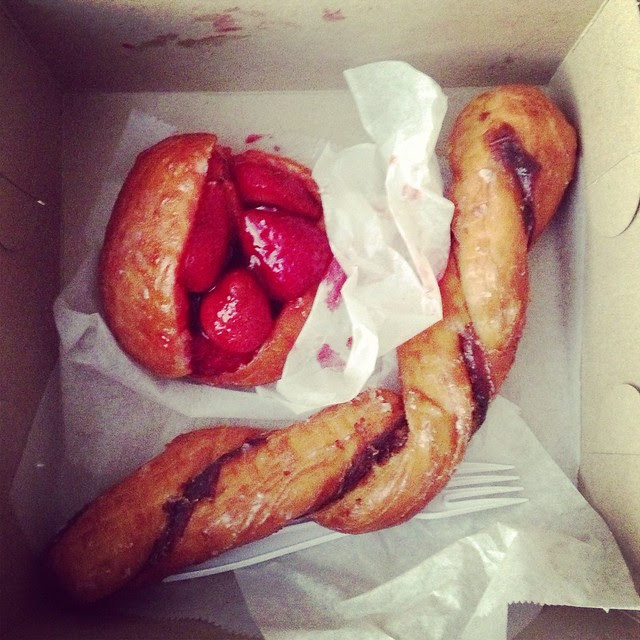 The highlight of my day today was meeting up with Debbie Carlos. She came to visit and brought some sweet donuts from Donut Man. We got to hang out over lunch and chatted about our cats. You know, just typical us.
Tags: renegade craft fair , weekend , work
0 comments

Now Available in the Shop!

I recently came across this beautiful floral fabric that I'm absolutely in love with. I love its light, watercolor-like feel. I've made a few new things from it that are now available in the shop. 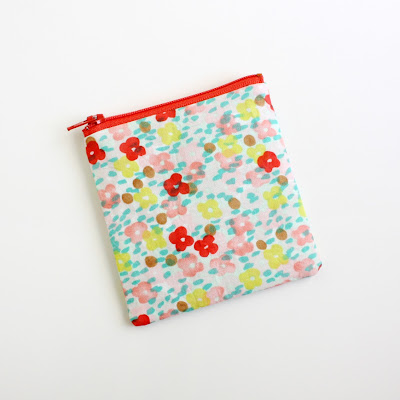 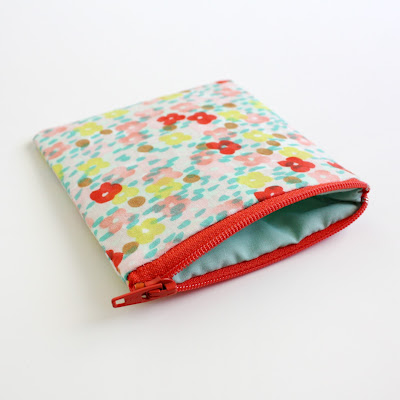 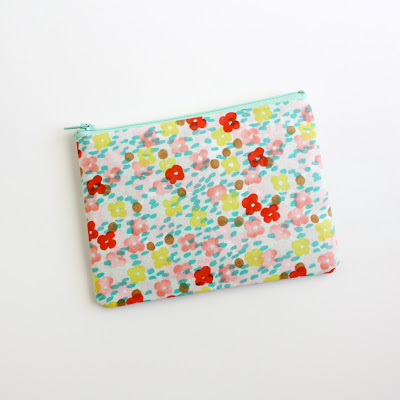 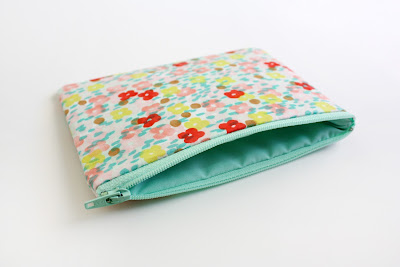 VSCO Grid is a minimal publishing platform from the makers of one of my favorite iPhone camera apps, VSCO Cam. It's different than Instagram in that it focuses purely on the beauty of photography. There's no "follow" button, no "like" button, no commenting. It's simply your little gallery of photos. But VSCO Grid didn't completely alienate itself from social media, you can still share your photos on Twitter, Facebook, Pinterest, or via e-mail. Anyone can have a VSCO Cam account, but the Grid is currently by invite only and I just got my invitation a few hours ago. It took them about a month from the time I signed up for them to send me an invite.

What I love about VSCO Cam is, unlike Instagram, the preset filters actually look more like real film photography. And even if a filter takes it a little too far, you have to option to go back in and edit the contrast, exposure, temperature, etc. I also love that the interface is very minimal and beautiful.

Here's a shot of Sebastian from my VSCO Grid. I promised that it won't all be just photos of him. 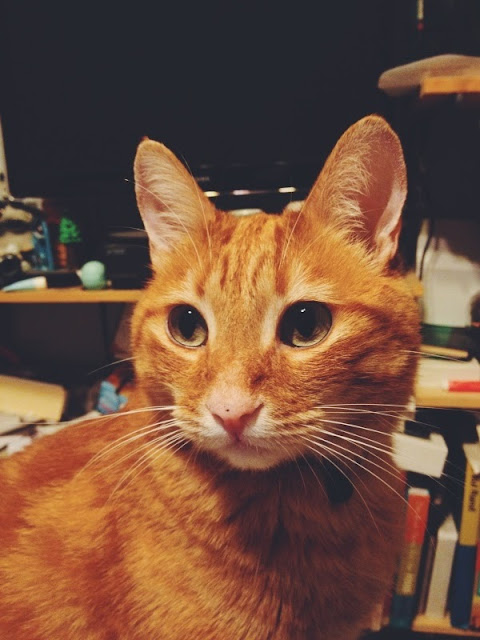 There's a New Shop in the Works

This has been on my mind for quite some time—the thought of opening a second shop. I've probably mentioned this before, but as my shop grows my Etsy fees keep piling up. Since October of last year, I've been paying at least $20/month but lately it's closer to $30-40/month. In the past, I've paid as much as $65 during a busy month, which I think is totally outrageous for how small of an operation my shop is. I love the Etsy community and all the exposure it's brought me, but the fees are killing me and sucking up so much of what I make. Aside from being a freelance graphic designer, my shop is currently my only other source of income so I really depend on it doing well.

(And that's probably the most money talk you'll ever hear come out of me.)

I've been dabbling with the idea of having a Big Cartel shop for a very long time. I've had a free account for about 5 years and just upgraded to a paid account earlier this year. I love everything about their platform and their monthly fee is affordable. Their lowest paid plan which is $9.99/month sounds a lot better than what I'm paying Etsy right now. The only major downside is that I get significantly less traffic going to it than with Etsy, which means I have to do significantly more marketing work to get it out there.

About 5 years ago, there was a moment in time when I considered changing my major from graphic design to illustration. I ended up deciding on sticking to graphic design because I had already invested so much time and so many units to it. Going through graphic design really opened my eyes to the world of branding, which has helped me a lot since being out on my own. But since graduation, I been having this itch to pursue illustration again. I've always loved stories and storytelling. When I was younger, I went through a poetry phase that later grew into an interest in creative writing. And what I love about illustration is it's a way of telling stories visually. I keep tons of notebooks & sketchbooks (hell, I even make my own!) and I have so many stories down on paper that I want to turn into real things; either as illustrations or zines.

I've also been feeling burnt out from Quiet Tiger. Because as much as the products do reflect my personality, to some extent they're also dictated by what customers expect from the shop and what's selling. Essentially, I started feeling like I'm just "the witty button girl". But don't get me wrong, I'm extremely grateful that a lot of people really love them. I just want to try something new and do more exploration & experimentation, which is why the new shop I'm working on is focused on personal work. For the new shop, I'm simply just going to make work that reflect me and how I'm feeling. A lot of it will be original drawings, prints, and eventually zines.

I'm currently working on new work for the new shop and hope to have new items up next week, so keep checking back. And of course, you can also follow me on Twitter to hear about when new items are added. In the meantime, some of the new mini pouches and cards are up in the shop.

You can find the new shop here.
From now until September 1st October 1st, you can get 15% off all orders with code: HELLONEWSHOP
Tags: future talk , new , shop
4 comments

New Additions to the Shop

I've been wanting to make some pouches for some time, but always struggled with zippers. After lots of practice, I finally got it!

Introducing, the new collection of carry goods now available here in the shop. There's many more new pouches on the way in various sizes. You can pick one up for yourself in a few weeks at Renegade Craft! 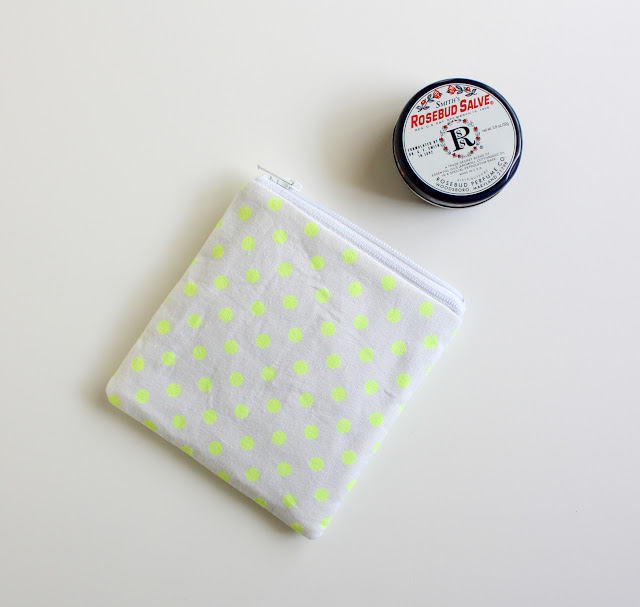